[If you missed the Week 1 recap, find it here.] 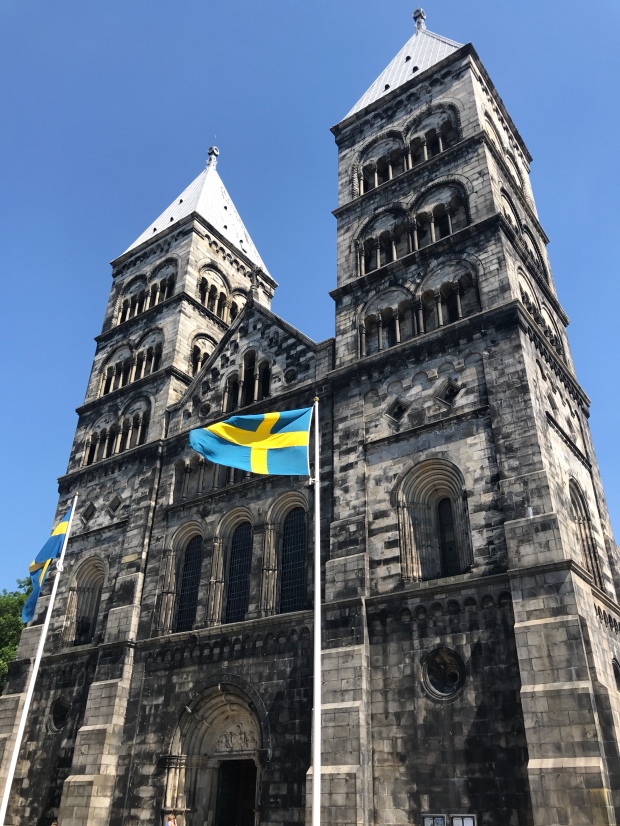 Week two began with a daytrip to the college town of Lund, in southern Sweden. This is a great place to escape the city, relax, check out the cathedral you see above, perhaps collect some data, and definitely eat some delicious cardamom buns. 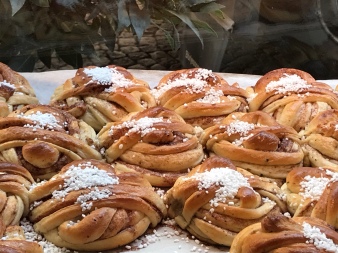 One of my favorite things about Lund is a lovely botanical garden, where we had a class meeting and discussed the concept of flow. The garden’s colors weren’t as vivid as last year’s, probably due to a drought, but we still found some nice patches.

Today was our last full day in Copenhagen. We had a fairly long class, mostly on work-life integration and “busyness bragging”. Lunch was all about going to favorite places one last time: the organic hotdog cart, the bagel shop, that one ice cream/churro place, coffee coffee coffee. Dinner was a pre-ordered meal that was…hilarious. 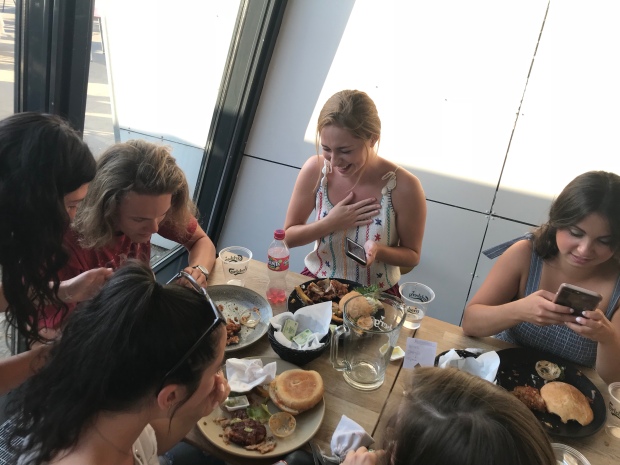 We were staying in the Norrebro neighborhood, which was ground zero for the first night of Distortion, a massive music festival that is better described in photos. Just imagine this scene over a square-mile or two. And imagine us trying to wheel huge rental bikes through this. We were not popular.

This was our day to travel to Stockholm, a five-hour train ride that left at 8:20 a.m. Despite a few snafus, (a cab that didn’t show and my desperate plea to a stranger to please drive us to the station), it all went smoothly. This is always a great chance to catch up on sleep and reading.

The students met with a DIS rep to take them to their housing, which is north of the city in a suburban area called Sollentuna (I remember this by picturing a mopey fish). We settled into our Gamla Stan (“Old Town”) Airbnb and immediately watched the previous night’s series finale of The Americans. Priorities.

Today started with a summertime must-do: a lunch cruise into the Stockholm archipelago, a chain of 30,000+ islands that stretches east from the city into the Baltic Sea. Many Swedes have summer houses and boats here (1 in 10 Swedes owns a boat) and it’s an important part of warm-weather recreation. 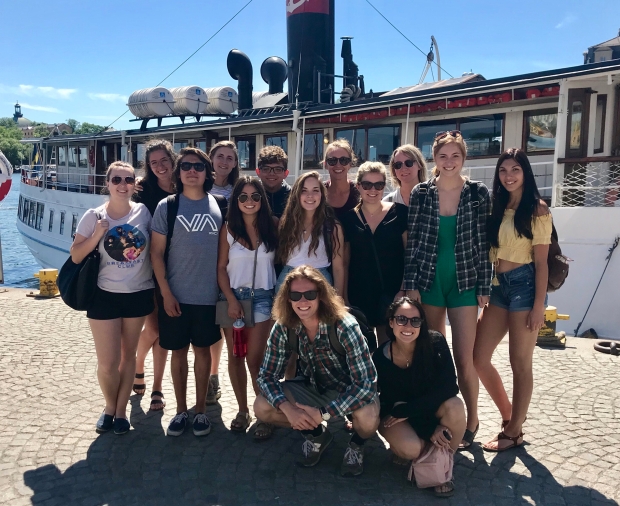 Weather is usually a primary concern for me on this study abroad, because so many of our activities are outdoors. But it’s barely mentioned here because we continue to be so ridiculously lucky! 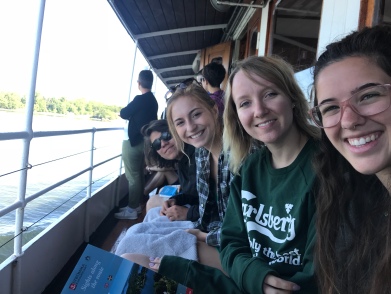 After the cruise, we had a class meeting on the small island of Skeppsholmen. Topics were friluftsliv and the feeling of awe, both very appropriate for the day.

There was some Gamla Stan wandering, too. As a well-preserved medieval town, pretty much everything here is photo-worthy. 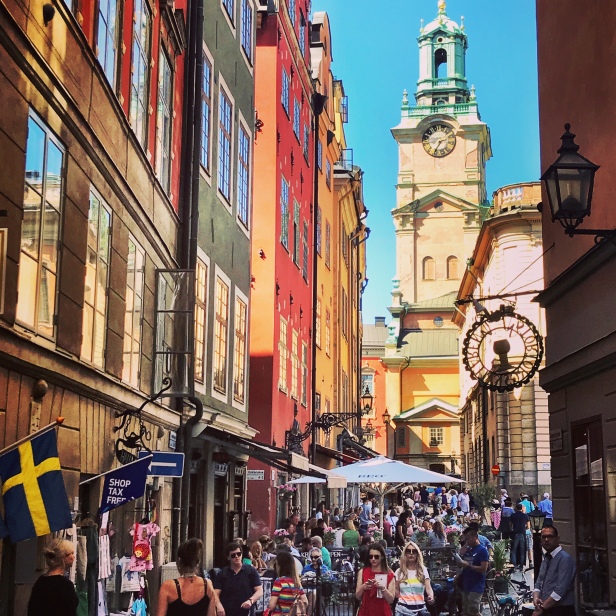 We found the oldest statue in Stockholm, the “little boy who looks at the moon,” and rubbed his head for good luck.

Today was largely a free day for students to collect data and explore Stockholm. I had planned to run the marathon (read all about that here) and was so happy and surprised that a group of students chose to spend a few of their free hours watching and cheering. 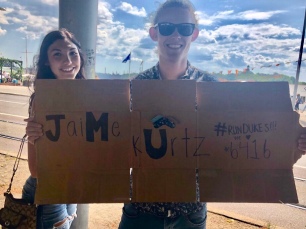 In the evening, most of us went on the Stockholm Ghost Walk, a tour of Gamla Stan that gives us a dark lesson into the history of Stockholm: mass executions, brothels, doomed searches for buried treasure, and not one, not two, but three different types of the plague. And lots of restless spirits. Good fun. 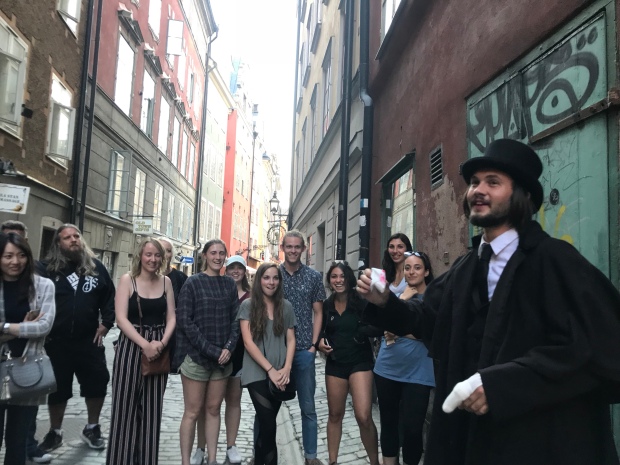 Yet another beautiful day to spend outside. We all took the streetcar to Skansen, the world’s oldest outdoor museum.

It’s massive and has all kinds of exhibits about traditional Swedish life (imagine a Swedish Colonial Williamsburg), but the Nordic animals were the biggest hit. 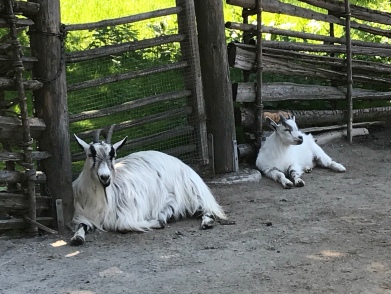 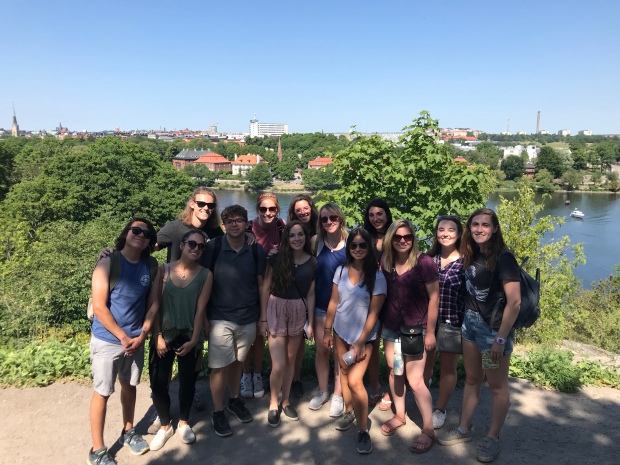 A big class day. The DIS facilities here are housed in the Royal College of Music. They practically require a retinal scan to access, but they’re quite nice when you do. 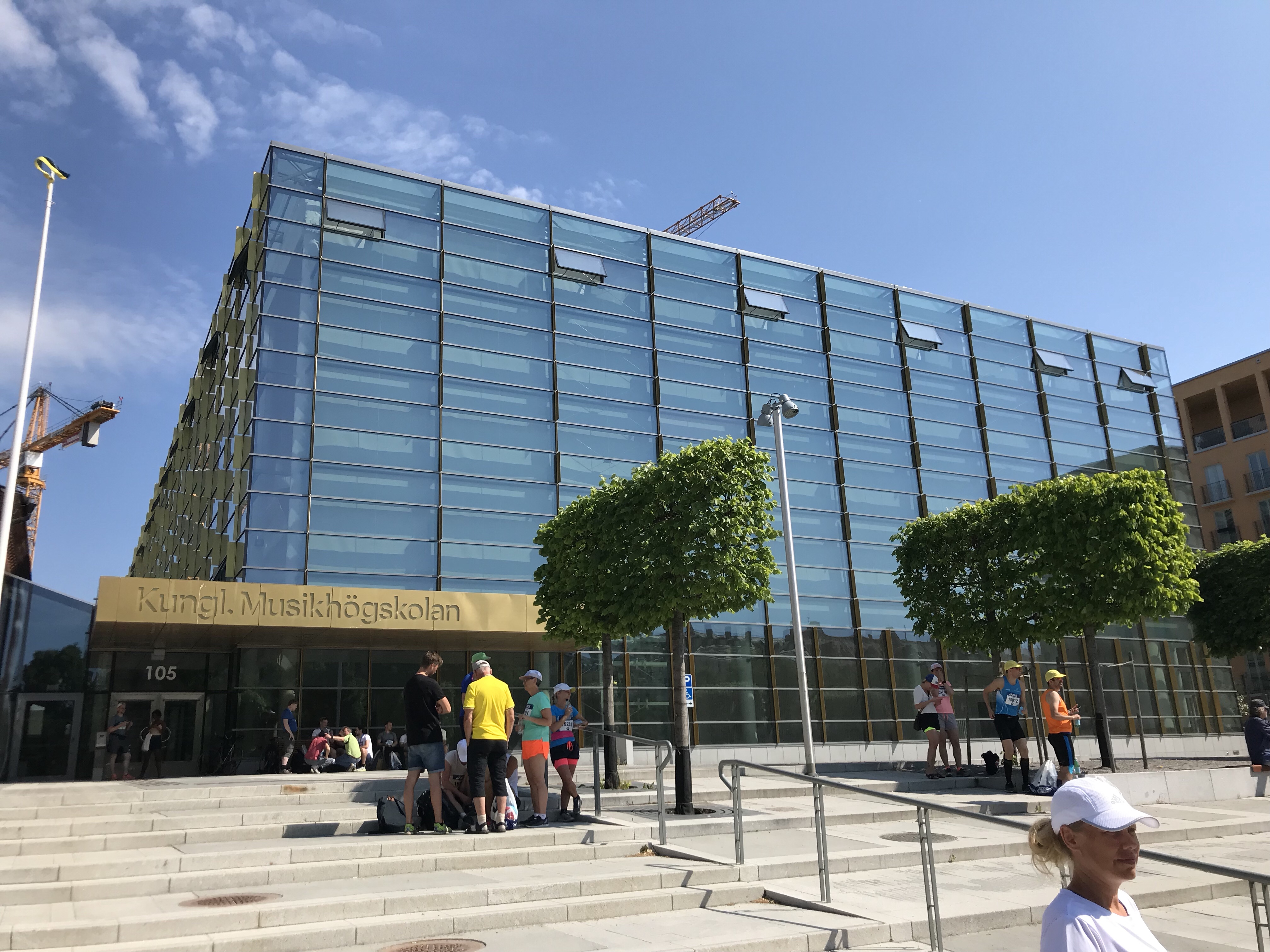 Anyway, we had a morning class meeting, a lunch break, and an afternoon guest lecture on Swedish politics from DIS professor Steve Turner, an American who’s been living in Sweden for 40 years. This was an intellectual high point of last year’s program, and was perhaps even more so this year, given the increasing frictions here and an important upcoming election.

It’s all too easy for us to leave here feeling like the Scandinavian countries are doing everything right while we are, umm, not. This lecture highlighted the complications of implementing the social welfare system and the moral conflicts woven into immigration policy. In short, it filled in some important gaps.

Today began with class. We first debriefed and discussed the previous day’s guest lecture, then everyone briefly presented their individual project findings. Our allotted two hours of classroom time flew by. We broke for lunch, packing time, and time to do all of those last things.

We met for a last group dinner at a Stockholm mainstay, Kvarnen. We finally got our fill of Swedish meatballs.

After dinner, we searched in vain for a karaoke place. Finding none, we settled for some very non-Swedish street singing, an Irish pub, and a late-night subway ride with a fire extinguisher incident that I need to learn more about (everyone is fine).

Last night, someone asked me to define the group in a single word. I couldn’t decide between three:

united – this group of 13 was often all together, and when they weren’t, I could never identify any cliques or anyone who wasn’t a part of things. Everyone seemed to genuinely like each other and look out for one another. I saw a ton of compromise, empathy, and good humor, even in stressful situations.

zany – I never worried about them being bored. They could create fun wherever they went, whether by killing a half hour by making their own beatbox band (complete with a few singles, an album cover, and a t-shirt design), cheering like mad at a marathon (generally not thought of as a great spectator sport), laughing their heads off at a catastrophically bad meal, and certainly many shenanigans I never heard about.  It was so much fun to be a part of this crazy crew. They reminded me to worry less and to laugh a lot more.

resourceful – they quickly demonstrated that they could figure things out on their own. They seldom needed me to point out directions or to suggest where to go. Multiple times, I realized that my suggestions were pretty lame compared to the things they’d find. They were also really good at getting things for free, like this:

My last day here. The students seem to have taken the sunshine with them, literally and figuratively. It’s Swedish National Day (think a toned down version of the 4th of July in the U.S.). Many things are closed, my energy is sapped, and it’s suddenly 50 degrees and cloudy. In other words, it’s a good day to blog, pack, and eat one last cardamom bun.

Until next year, Scandinavia!

I typically get a little down every year, right around this time. The days are getting dramatically shorter, the windows are soon to be sealed shut, and my bright summer dresses have been relegated to the back of the closet. To pass the time between November and March, I’d binge-watch and binge-read and count the days until my self-imposed hibernation ends and the warm Virginia weather returns.

What changed? Well, a couple of years ago I learned about the Danish concept of hygge, and this winter, I vow to bring more of it into my life.

Hygge (pronounced – kind of – like HOO-ga) is one of those untranslatable foreign words that suggests a way of thinking that we Americans just don’t quite grasp (but a fun attempt to define it is here). It roughly translates to coziness, contentment, and lack of anything unpleasant. It can be found in quiet conversations with friends, in candles, fireplaces, snuggly robes, a glass of wine, warm blankets, or steaming coffee. A hyggeligt (the adjective form of hygge) environment is your safe haven.

In Denmark, hygge is practically a survival strategy in the long, cold, and very dark winters. The sun goes down around 4 p.m. and doesn’t rise again until mid-morning. That means that anyone who is employed in the traditional working hours has little opportunity to experience daylight. And this deprivation drags on for months.

This sounds like a recipe for depression, yet Danes are constantly rated among the world’s happiest people. As many have suggested, hygge may play a key role.  And, unlike universal health care, generous parental leave, and subsidized college education, the beauty of hygge is that it’s something we can easily import to States.

Want to have a more hyggeligt winter? Want to transform the dark, cold months into something to anticipate and savor rather than something to grimly endure? Here are some tips:

Start with a little self-experimentation. Look around your home and note what spaces and items make you feel content and at peace. What is it about these spaces? And what spaces make you feel tense or unhappy? Those might need some addressing. (Right now, there is a huge stack of books and papers under my coffee table. Every time I see them, I feel a little tense as I’m reminded of the work I’m not doing. Definitely not hygge!)

What does make me feel warm, safe, and snug are these slippers (seriously worth the splurge), these candles (not a splurge at all!), watching reruns of Gilmore Girls, looking through old photos, or reading a good novel with a lot of lights turned on. Even better if I can smell something yummy cooking. (Slow-cooker meals, therefore, are very hygge.) And that pile of books and papers? That has got to go.

Start by checking in with yourself and coming up with your personal definition of hygge. And get your family in on the discussion too! Here are some great tips for working hygge into family life.

Think carefully about the spaces you inhabit. Is your home welcoming? Warm? Cozy? Danes generally don’t go for big, sprawling spaces but instead pay thoughtful attention to details: lighting, books, meaningful possessions. Less clutter. There are no hard-and-fast rules here (but if you want some ideas, just type “hygge” into Pinterest, or check out this piece). Hyggifying your home is possible at any income level and, at most, may require purchasing a new lamp or two. You don’t need to get fancy. In fact…

Hygge is most definitely not fancy. It’s not pretentious or status-conscious. No judgment, no posturing. Cast aside your need for perfection. Don’t put off inviting people over because you still have to replace those broken kitchen tiles or perfect your recipe for coq au vin. Sharmi Albrechtsen, who frequently blogs about Danish happiness, once told me that trying to one-up or impress your friends and family with fancy food and drink is pretty much the opposite of hygge, as it doesn’t foster warm feelings at all. Instead, hygge is modest, comforting, and familiar. This recent trend, then, might just be perfect.

Don’t hibernate. Stay social. Winter can foster a real sense of isolation as we hunker down and close the world out. But Danes stay social in the winter, having small gatherings, going to snug cafes, and getting really, really psyched for Christmas. Christmas is huge in Denmark. It seems as if all of December is spent gearing up – preparing food, decorating, visiting friends. And the big event? With the lighting, music, family, friends, and traditional foods, you might say it’s hygge at its finest. 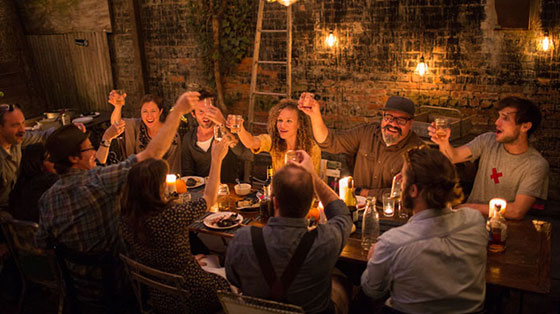 Want to read more about hygge and related concepts? Here’s a fascinating take on how people can thrive in harsh winters around the Arctic Circle (in Norway, but still). Author and reluctant Denmark transplant Helen Russell explores hygge and Danish happiness in The Year of Living Danishly. And I can’t wait to see what Danish happiness researcher Meik Wiking has to say in the forthcoming Little Book of Hygge.